Over the last few weeks here at Rare Bird Network we've been busily trying to find a way of setting up a system so that when we send a tweet with a specific hashtag you can receive an alert on your phone. Now we've found out how!

I'd originally started looking at whether it was possible to be alerted by one of the big Twitter clients (Hootsuite, Tweetdeck or Tweetbot). I looked into it and discovered that Tweetdeck originally offered this service but it had been removed (or at least it's been removed from the iPhone app). I've registered with them for it to be added to future upgrades so if anyone would like to see this too then get in touch and I can send you a link so that you can also register your interest.

Then just yesterday one of the rbnUK followers, Londonbirder69 tweeted that he'd found a site for Twitter alerts! The site is called ifttt.com and basically you create a search and when that search is found an alert is sent either by email or SMS. There are various other functions to be played around with but for us those are the most interesting.

Below is a screenshot of setting up an email alert to be sent to my phone when the hashtag #rbnMEGA is used.﻿


﻿With this set up the next thing to do was give it a test, send a tweet and include the hashtag.

Once the tweet was sent it was just a matter of sitting back and waiting for the email to arrive.

﻿
The email alerts seem to take up to a maximum of 30 minutes but are generally much quicker. I've no idea how long it takes for an alert to be sent out from one of the paid services, but this is a completely free bird alert service!

So if you want alerting the next time we tweet #rbnMEGA or one (or more) of your local area hashtag codes get over to ifttt.com and register for an account. It's pretty straightforward to set things up and should only take a few minutes.

Once registered, follow this link https://ifttt.com/recipes/59615 to receive an email alert whenever we tweet about a new mega turning up. If you want you can alter the "recipe" for example you can change how you receive your alerts, if you'd rather receive them by SMS or Pushover. It's also possible to alter the hashatg so that you'll receive an alert whenever we tweet about a bird in a county of your choice.

I understand that SMS messages are charged for at your providers basic rate, though I have not yet tried the SMS service myself so cannot confirm it.

At some point in the future the plan is to have an all singing and dancing Rare Bird Network app, but as everything is self funded at the moment this may take a while to reach fruition. So until that day this is a fantastic work around.

I'd really like to thank Londonbirder69 for getting me on to this, without their input it would undoubtedly have taken much longer for a decent alert service to be set-up. If anyone else has any other suggestions or comments on ways of receiving phone alerts please get in touch.

UPDATE: Unfortunately Twitter have recently changed the way that third parties can use their information. This means that (for the present time at least) IFTTT can no longer provide hashtag alerts. Please click on this link for alternative methods of getting alerts sent to your phone.
Posted by Rare Bird Network at Thursday, June 28, 2012 1 comments 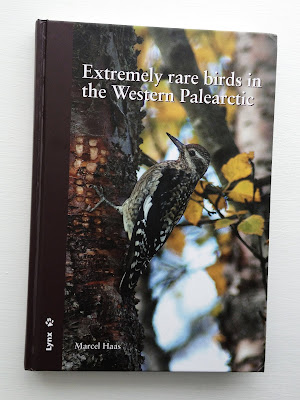 Just last week my eagerly awaited copy of Extremely Rare Birds in the Western Palearctic by Marcel Haas fell through the letterbox and on to the doormat. The book was released back in February and I had already read a little about it over on BirdForum and more recently read the Birdwatch Review and intrigued by what I had read I decided to buy myself a copy.

It has a RRP of £25, although it is currently on offer (there's a link at the bottom of this review). The book is available only as a hardback and is roughly the same size as the average Poyser monograph (24 x 17 cm). My first impression, as I removed the bubble wrap was a good one, as I was welcomed by the fantastic image of a Yellow-bellied Sapsucker on the front cover. 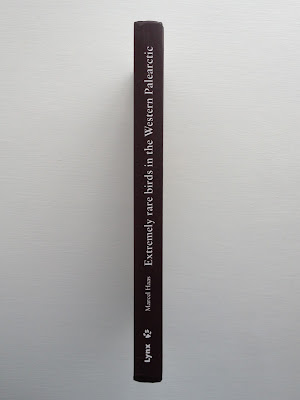 The book is 244 pages long and contains over 300 colour photographs, some of the images contained in this book are published for the very first time.

A slight bugbear of mine is when the title of the book is written "upside down" on the spine (I know...I'm picky). I'm not sure if this is a continental thing but to me it just doesn't look right, maybe I've just got a little bit of OCD.

But the most important thing about any book is of course the content.

The book describes the 155 species of birds that have occurred less than ten times in the Western Palearctic (Europe, North Africa and the Middle East) and have been accepted by the relevant rarities committees. The book covers the period from 1800 to 2008 although three species recorded since then (African Openbill, Asian Koel and Ashy Drongo) are added as an appendix. 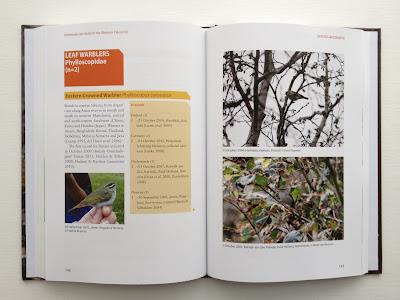 Each species account starts with a description of the bird's distribution and movements. I personally would have preferred to have seen this summarised in a map, as if your knowledge of geography isn't great you might struggle a bit picturing the normal range of the species being described.

The records are then briefly described (sometimes just a bit too briefly) including important records that have been rejected, when most records have occurred and other such details.

For each species there is also a table, listing alphabetically by region where and when each record occurred. This I feel would have been better presented chronologically, so that each species account started with the earliest record and ended with the most recent. 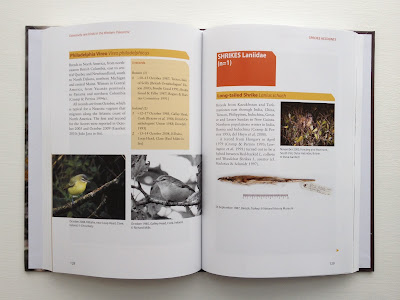 The images include many museum specimens either mounted or as skins. Some of the older records I must admit to often having a little doubt over. I guess my opinion has been clouded by the "Hastings Rarities" records and the Meinertzhagen Bird Collection. So it was both interesting and reassuring to read the comment that four spectacled eiders recorded by Meinertzhagen in Russia should be considered doubtful. 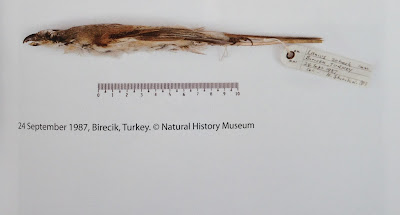 Although the museum specimens are of interest, I personally feel that they don't offer a great deal to the book. If no photograph of the actual wild bird was available I would have rather seen an image of a different bird. I want to see what the bird really looks like! So after seeing the rather sad looking Long-tailed Shrike (right) I was pleased to turn over the page and see this beautiful image (below) taken by Ole Krogh. It's a shame that there aren't more images like this throughout the book. I completely understand why the author has chosen to use the museum specimens but in my opinion the book would have been enhanced with more high quality images. 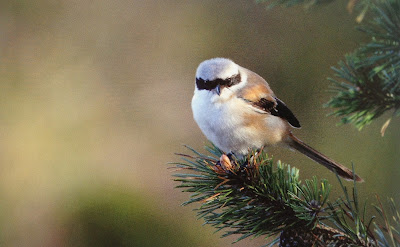 On several occasions there is a photographic record shot of the bird within a group of other birds and it's not automatically obvious which bird is the rarity. This could have been very easily remedied in the photo caption.

Conclusion: Due to the lack of any maps and not putting the records into chronological order it is often quite difficult to quickly retrieve the information on a given species.  This combined with the lack of  more "useful" photographic images means the book doesn't quite reach it's full potential.

But this is still a worthwhile book to have. The author has gone to a lot of trouble gathering all the information and photographs together and it's great having all that information readily at hand. It's not really a book to read cover to cover but it is nice to dip in and out of to help whet your appetite for what might be waiting for you out there.

Off to a flying start

We've been busily Tweeting away for just under three weeks and the Rare Bird Network website was launched two weeks ago. So, what's happened in this time?

With over 150 Twitter followers and almost 1500 web hits there's certainly been a good deal of interest.

Numerous hashtags are now being regularly updated by some of you, notably #rbnSFK #rbnKEN #rbnLND and #rbnGWY There are several other hashtags now in use but those mentioned are perhaps the most active at the moment. So if you've not adopted a hashtag yet, what's stopping you?

One possible reason is that you already use a different hashtag. If you bird in London maybe #LondonBirds or if you're a Gloucester birder #GlosBirds. But there's really no reason why you can't use an RBN hashtag as well, it only uses 7 characters of the 140 you can use in your Tweet! If sometimes you can't fit in one of our hashtags it's no great loss but the more you use it the more you'll help the increasing number of birders who are using Rare Bird Network.

We're obviously not going to see an overnight change in the way birders use Social Networking but it's hoped that rarebirdnetwork.co.uk will become a bit of a central point where people can visit us and pick up the relevant information that they need to find out what's going on and where. That's why we're also developing a comprehensive map of blogs and websites that are all regularly updated with bird sightings from across the UK.

"...Have you seen this? Looks like beginning of a useful system...(it's) about setting up a national system. Need to introduce some common standards...Early days yet. Won't work if we don't all get involved."

"I think we should all use the hashtags suggested by Rare Bird network; it will benefit all UK Birders..."

"@rbnUK the very best of luck. You have my full support. #birding"

For Rare Bird Network to succeed it's all about you, it needs your involvement, it needs you to persevere, it also needs you to encourage others to become involved. By helping spread the message of what we're trying to achieve (a free bird sightings service that covers the whole of the UK) you can make it succeed.

Thank you to everyone who's followed us on Twitter, used one of our hashtags and spared the time to read this. It really is appreciated! :)
Posted by Rare Bird Network at Friday, June 01, 2012 0 comments